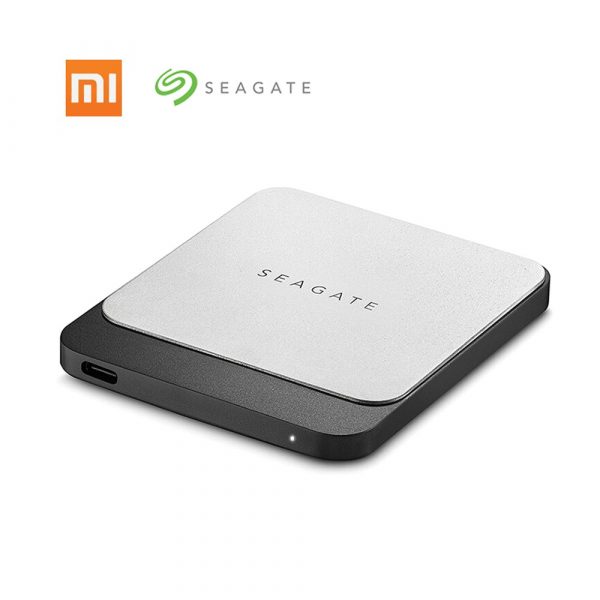 Description
A solid-state drive (SSD, also known as a solid-state disk although it contains neither an actual disk nor a drive motor to spin a disk) is a solid-state storage device that uses integrated circuit assemblies as memory to store data persistently. Solid state is a term that refers to electronic circuitry that is built entirely out of semiconductors. The term was originally used to define those electronics such as a transistor radio that used semiconductors rather than vacuum tubes in its construction. Most all electronics that we have today are built around semiconductors and chips. In terms of a solid state drive, it refers to the fact that the primary storage medium is through semiconductors rather than a magnetic media such as a hard drive.

A ORIGINAL SEAGATE PORTABLE EXTERNAL SSD
82g ONLY, 9mm ultra-thin
Many SSDs on the outside look almost identical to a traditional hard drive. This design is to allow the SSD drive to put in a laptop or desktop computer in place of a hard drive. To do this, it needs to have the standard dimension as a 1.8, 2.5 or 3.5-inch hard drive. It also uses the common SATA interface so that it can easily be placed into any PC as a hard drive would. There are several new form factors such as M.2 that look more like a memory module.

Why Use a Solid State Drive?
Solid state drives have several advantages over the magnetic hard drives. The majority of this comes from the fact that the drive does not have any moving parts. While a traditional drive has drive motors to spin up the magnetic platters and the drive heads, all the storage on a solid state drive is handled by flash memory chips. This provides three distinct advantages: Less Power Usage, Faster Data Access, Higher Reliability.
The power usage is a key role for the use of solid-state drives in portable computers. Because there is no power draw for the motors, the drive uses far less energy than the regular hard drive. Now, the industry has taken steps to address this with drives spinning down and the development of hybrid hard drives, but both of these still use more power. The solid state drive will consistently draw less power than the traditional and hybrid hard drive.

Max Data Transfer: 540 MB/s
Faster data access will make a number of people happy.
Since the drive does not have to spin up the drive platter or move drive heads, the data can be read from the drive near instantly. Hybrid hard drives do tend to mitigate the speed aspect when it comes to frequently used drives. Similarly, Intel's new Smart Response Technology is a similar method of caching on a small solid state drive to produce similar results.

Reliability is also a key factor for portable drives.
Hard drive platters are very fragile and sensitive. Even small jarring movements from a short drop can cause the drive to have issues. Since the SSD stores all its data in memory chips, there are fewer moving parts to be damaged in any sort of impact. While mechanically SSD drives are better, they do have a limited lifespan. This comes from a fixed number of write cycles that can be done on a drive before the cells become unusable. For most consumers, however, the write cycle limits tend to still allow the drives to last longer than the average computer system.

512GB/1TB Portable SSD Capacity Available
The average laptop computer equipped with an SSD will have around 128 to 512GB of storage. This is roughly equivalent to what laptops of several years ago with magnetic drives came equipped with.

Wide Compatibilty Formatting: PC or Mac
Even with the huge difference in capacity, most computers have far more storage capacity than they used to. Only a large collection of raw digital photo files and high definition video files will likely fill up hard drives quickly. As a result, solid-state drives will generally offer a sufficient level of storage for most laptop computers.
Note: Please Note that Comes from xiaomi youpin Ecochain, there is no xiaomi logo on it.

There are no reviews yet.